As I study Korean history, I’m amazed by the perseverance of the people.   Recently I had the privilege of reading the book,  When My Name Was Keoko by Linda Sue Park.  Very early on in reading this story, I had to dry my eyes. This is a moving story through the eyes of children as the Japanese control Korea. From the style of hair and clothing they wore, to what language they learned.

When I saw this book, I thought of the drama Bridal Mask.  Both are excellent resources to learn about Korea during the Japanese rule, and how brave men and women kept their language and culture alive

When My Name Was Keoko 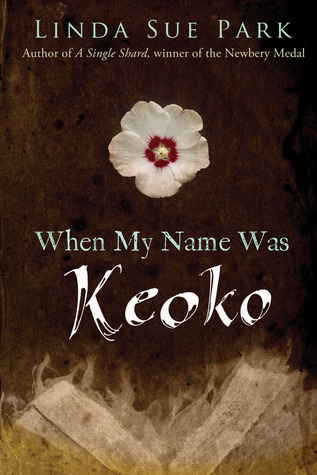 Sun-hee and her older brother Tae-yul are proud of their Korean heritage. Yet they live their lives under Japanese occupation. All students must read and write in Japanese and no one can fly the Korean flag. Hardest of all is when the Japanese Emperor forces all Koreans to take Japanese names. Sun-hee and Tae-yul become Keoko and Nobuo. Korea is torn apart by their Japanese invaders during World War II. Everyone must help with war preparations, but it doesn’t mean they are willing to defend Japan. Tae-yul is about to risk his life to help his family, while Sun-hee stays home guarding life-and-death secrets.

Based on the hit manga series of the same name, Bridal Mask brings viewers to 1930s Korea during the height of Japanese imperialism. Lee Kang To (Joo Won of Baker King Kim Tak Goo) is an ambitious and callous Korean officer employed by the Japanese colonists. Despite his mother’s disapproval of his work and his own brother’s antagonistic history with the Japanese, Kang To continues to play by the colonist’s rules in hopes of becoming successful and bringing his family out of poverty. However, a mysterious figure wearing a traditional Bridal Mask always seems to get in Kang To’s way. The Bridal Mask appears as a Zorro-like figure who protects the people from the Japanese colonists’ oppression and abuse of power. An unexpected turn events brings Kang To to cross paths with the mysterious Bridal Mask, changing his future and the nation’s history forever.

Contains some violence that will be hard on sensitive viewers.

The only info I can find on the manhwa (let’s use the correct name for a Korean comic here) is a Korean language edition.

If you know of another novel, drama, or manhwa that is set during this time period, comment and let me know.

2 thoughts on “Korea under Japanese Occupation”